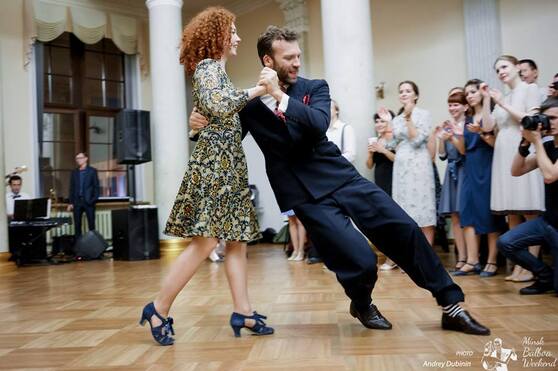 
​OLGA
Olga was born into a family of teachers and since early years has been an energetic live wire – studying music, doing athletics, martial arts and gymnastics. In 2007 she was introduced to Lindy Hop and this is where the real passion story begins. She got dance hooked and started to explore more of the dance world by getting into Blues and later Balboa. She has been actively traveling the globe in pursuit of more opportunities to dance, learn and compete. Later she began to share her love for swing music and dance by teaching. Now Olga is the international balboa instructor, teaching solo and couple Balboa all over the world.

At her classes she pays a lot of attention to getting the students interested and involved by giving challenging and fun tasks, working both on technique and musicality and infecting them even more with the love of dancing. For the time being she is passionately developing a new direction of swing dance practices – iSoloBalboa – offline and online solo classes for balboa leaders and followers which aim at polishing up technique and developing creativity and personal aesthetics.

ANDREAS
Andreas Olsson lives in Stockholm, Sweden. He grew up on the wrestling mat, fighting other little boys in leotards. He won most of the time since he’s always given 100% in everything that he does. He also played the violin in his childhood. You might not think classical music and wrestling has much in common with Swing dancing, but it has definitely contributed to him becoming the unpredictable, creative, musical and interesting dancer he is today.

Andreas was introduced to Lindy Hop in 2001 and a few years later to Balboa and other dances. As a dancer, Andreas is known for his his unique style, creativity and musicality. He is a technical dancer who is highly appreciated for his social dancing skills and his ability to connect and dance with follows of many different styles. He thinks of himself as a swing dancer first and stresses the importance that dancers today learn a little bit of all the swing dances.

As a dance teacher, Andreas has a warm and comfortable approach towards students. He is known for being good at breaking down the dances in an understandable way through inventive exersizes and class contents. As Andreas sees it, teaching inspiring not only because it allows you to see dancers improve, but also because it offers a possibility to learn more about dancing and to contribute the ever-changing dance styles.